To celebrate National Poetry Day on Thursday 3rd October, Doncaster Libraries held 2 events. At Doncaster Central Library, Betty & Al provided a great morning's entertainment of poems and songs. Betty is well known for her witty recitation and Allan accompanied her with some songs on his guitar.

In the afternoon, we held a poetry event with a difference. Promenade & Poetry involved wandering through the stunning show gardens of Walkers' Nurseries, stopping to listen to Carola Luther, Wordsworth Trust Poet in Residence 2012. The theme was water and the rain thankfully held off till the last poetry session, when everyone headed back to Walkers' Cafe for coffee and cake.

We are pleased to announce the winner of the children's poetry competition. Children aged 7-13 years old were asked to write a poem about ‘Water' which was the official theme for National Poetry Day 2013.

We received 134 entries and it was very hard to pick only one winner. However, it was agreed that the winning work is exceptionally good and definitely deserves a prize. Laura Goddard, aged 10, will soon receive her prize: a family ticket to the Yorkshire Wildlife Park.

Winning Poem
Water by Lauren Goddard
To view a larger version, please click on the image. 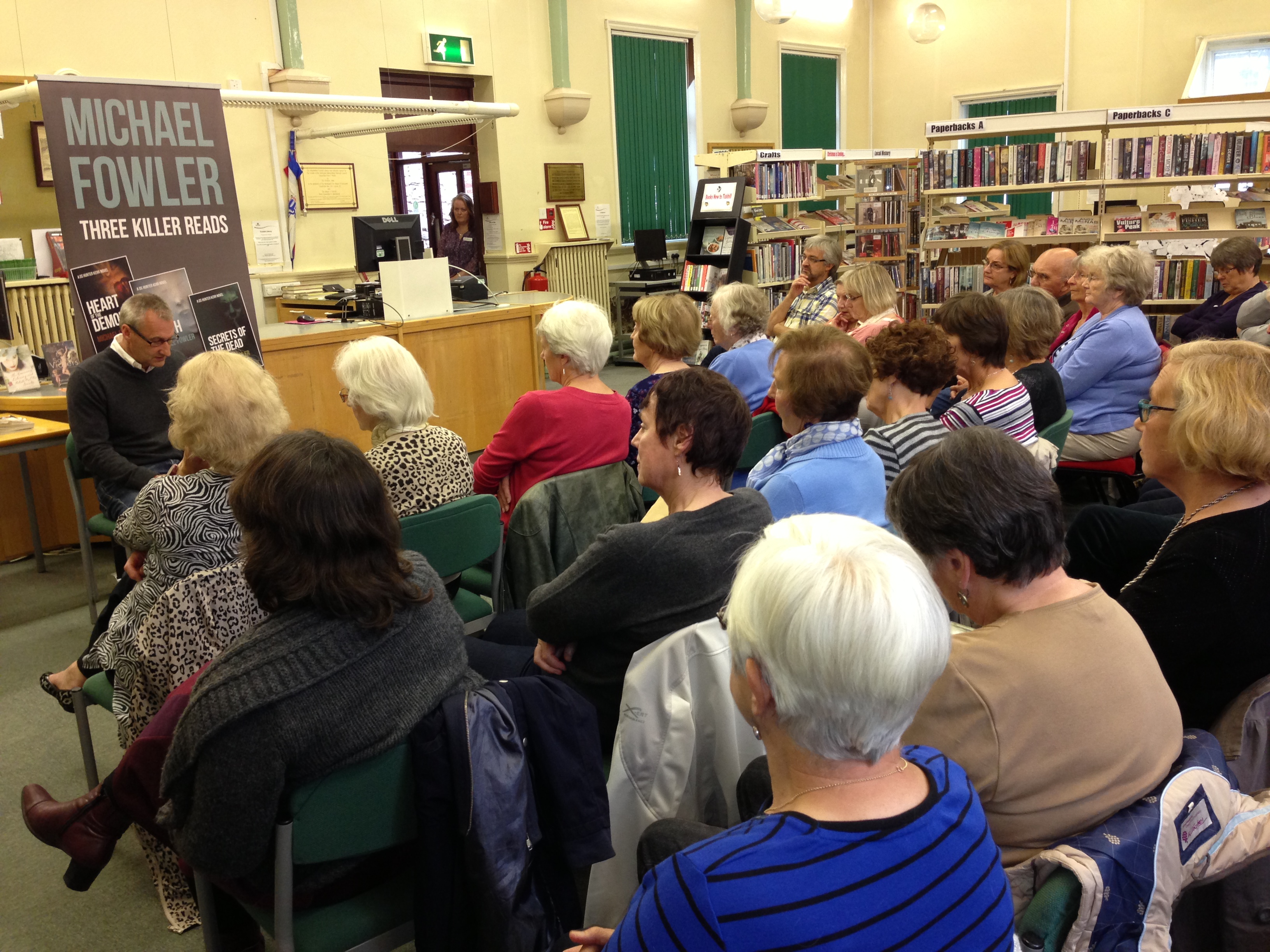 On Thursday 3rd October local author Michael Fowler, appeared at Tickhill Library in front of his second largest ever audience. He enthralled everyone with his exploits as a policeman, confirming that in his time on the force, policing really was just like the TV programme “Life on Mars”.

In common with Stephen Booth, who appeared at Tickhill Library in the summer, Michael always wanted to write from an early age, in particular science fiction. He still has the typewriter he received aged fourteen, a very treasured possession.

When Michael joined the police, he began jotting down his experiences, crafting incidents he had been involved in into storylines. As his career developed so did his plots, especially when he became a detective.

In 2006 he retired from the police following 32 years service. He had a folder full of rich crime material. With no more distractions he began the journey of writing the crime novel he had always promised himself.

When Michael began writing “Heart of the Demon” he determined that his central character, Detective Sergeant Hunter Kerr, would be semi-autobiographical. However, his physical characteristics are based upon the actor Richard Armitage, from the TV programme “Spooks”.

The audience listened spellbound to extracts from his latest novel, “Secrets of the Dead” & a lively discussion took place thereafter.

On Friday the 25th of October there will be a new group starting at Bentley Library called "Open House". It has been set up by a member of the Bentley community in partnership with library staff following the success of the library's coffee morning in support of MacMillan Cancer Support. Everyone had a great time meeting up and it was agreed that it was a great shame that there weren't similar events more often, especially with the winter fast approaching. We were then asked if it would be alright to plan some sort of regular event for people to meet up, share skills and ideas, and find out what's going on in the greater Bentley community. The group will evolve into whatever it's members want it to be and we're prepared see other events, activities and courses growing from it but the main purpose of it is inclusion.

Anyone is welcome, whether they want to just have a drink and a chat, learn new skills and crafts or share their own existing ones. The group will be running every Friday from 10am until 3pm at Bentley Library.

The Light Between Oceans by M. L. Steadman
Review by Mary

A story of a lighthouse keeper and his wife who face a moral dilemma. An emotional and heartfelt tale that makes you wonder what you would do in the same situation. I can’t say much more without giving away the plot.

This one was recommended to me by a customer. He said that himself and his wife thought that this was the best book they had read this year. The book certainly had an interesting plot and I thoroughly enjoyed it. You could not help but sympathise with the characters and the loss and grief they felt.

Well worth a read and it made a nice change from my normal choices. Quite moving and yes I did reach for the tissue box.

The White Princess by Philippa Gregory

This is the fifth book in this series by Philippa Gregory, and if you watched the White Queen series on TV, this is the follow on to that. It tells the story of the White Queen’s daughter, Elizabeth of York, and her struggles between her loyalty to her Tudor husband, and loyalty to her mother who is plotting against him. This is a very enjoyable book, although I didn’t really warm to the main character.

Comprising of the books "American Tabloid", "The Cold Six Thousand" and "Blood's a Rover" this excellent trilogy covers 14 years of American history between 1958 and 1972. Real life events are expertly intertwined with fictional characters to create more conspiracy theories than you can shake a stick at. Many seminal events are given the treatment from the Bay of Pigs fiasco, the Kennedy and King assasinations, Howard Hughes taking over Las Vegas and the Vietnam War, and all are seen through the eyes of the main protagonists, many of whom are actively involved in the outcomes. All of the central characters of each book are superbly crafted, often very flawed and rarely virtuous people but I wouldn't recommend getting too attached to any. Throughout the trilogy there are some, often shocking, exits for characters that I personally hoped to see survive to the end and new characters, previously ancillary, step in to take up the leading roles. Given the subject matter and the time setting it is unsurprising that the content is usually extremely dark. These books are not for those easily offended as the frequent foul language, graphic violence and sexual references can be extremely upsetting and certain words and phrases are overused with the clear intention to shock. If you can cope with this though you're left with a trilogy that weaves genuine history with outright fantasy to tell a very dark, usually shocking, but constantly gripping tale of conspiracy and greed.

This is the sixth book in the Michael Bennett series by James Patterson. I was slightly disappointed with this book as it didn’t really seem to get going until the latter stages of the book. Still worth a read though if you like this series.

Me and Mr Jones by Lucy Diamond
Review by Mary

A light easy read that is entertaining and charming. A good bit of escapism.

The story circles around the Jones’ family which consists of parents, three brothers and their associated wives/partners and children. The story is well written and keeps you engaged throughout with characters that you care about. The ending is a bit predictable but it doesn’t spoil the book. I would recommend this to any lovers of the chic lit genre.

Another good imaginative story from the master storyteller. A little far fetched but read for entertainment and pleasure it does its job.

Basically animals take over the world as a result of the human race destroying it. The main character Oz is likeable and the story flows well. A page turner that I enjoyed while on holiday. I liked the fact that it did not tie everything up at the end. Call me strange but I like books without happy endings sometimes.

Standing in Another Man’s Grave by Ian Rankin

If you are a Rebus fan and missed the comeback novel then it is well worth searching it out. Rebus returns in the cold case unit which soon turns hot as he finds links and leads to present day murders. The story twists and turns as Rebus drives his horse and cart through the rules and regulations.

A real treat to read a new Rebus novel and find out what is happening to him and his fellow travellers.

2. Other Worlds (abridged) by Barbara Michaels

5. Life Below Stairs by Alison Maloney

7. A Brewing Storm by Richard Castle

8. The Blind Goddess by Anne Holt

9. The Duchess Hunt by Elizabeth Beacon

Doncaster Libraries recently got involved with Get Online Week 2013 attending 6 events in libraries, at the Civic Office and the Job Centre. We spent time talking to the public raising awareness of the Learn My Way website and telling them about what is available in libraries. It was good to talk to people at the Job Centre as many of them were library users but not all were aware of the free internet we offer.

Over the week we spoke to over 150 people. At the libraries where "IT and Coffee" events were held (Armthorpe, Bentley, Cantley and Central) there were 23 people who gave the Lets Get Digital module/game a go as well as 3 people who signed up and started using Learn My Way. We also gathered names of several people who were interested in coming along to the support sessions that are held at Central Library.

Conisbrough Library had a class visit from Balby Street Primary School who then sent all the staff lovely letters thanking them for making their visit so enjoyable. The staff are looking forward to another visit by a different class in the first week of November.

The staff at Conisbrough volunteered the library as a collection point for any donations (they already have a three piece suite, a hoover, toys and books) to the family in Conisbrough who sadly lost everything they owned, as well as their 2 year old little girl, in a house fire last week.

Public Information Online is a virtual library of official papers. It will allow you to view UK Parliamentary, Scottish Parliamentary, Northern Ireland Assembly and Non-Parliamentary publications in PDF format online.

Author Ian Rankin talks about his new book Saints of the Shadow Bible.

In all £345 was raised for this worthy charity.

Visit the digital library to loan eBooks and audiobooks

On Friday 4th October Mexborough and District Heritage Society had an official opening of the new Heritage Centre within Mexborough Library. Local people along with some children from Doncaster Road School attended the event.

An art competition was undertaken by the school, the winner of which was to officially open the centre. The competition resulted in a draw between two children who cut the ribbon together at the opening.

An exhibition was on display showing pictures of a variety of local interest topics. We discovered that the man who helped to make the lions in Trafalgar Square came from Mexborough, as did Britain’s first formula one racing driver, the first Miss World and many other stars from cinema and music.

A member of the society said “Now that the centre is open everyone will be able to study the extensive archives, photo collection, census returns and church records, plus have use of the family history websites that can be accessed free of charge via the library’s computers”

The group receive approx 200 enquiries a month by email and from visitors. The centre is open on Fridays from 11am-4pm and at some other times by arrangement.